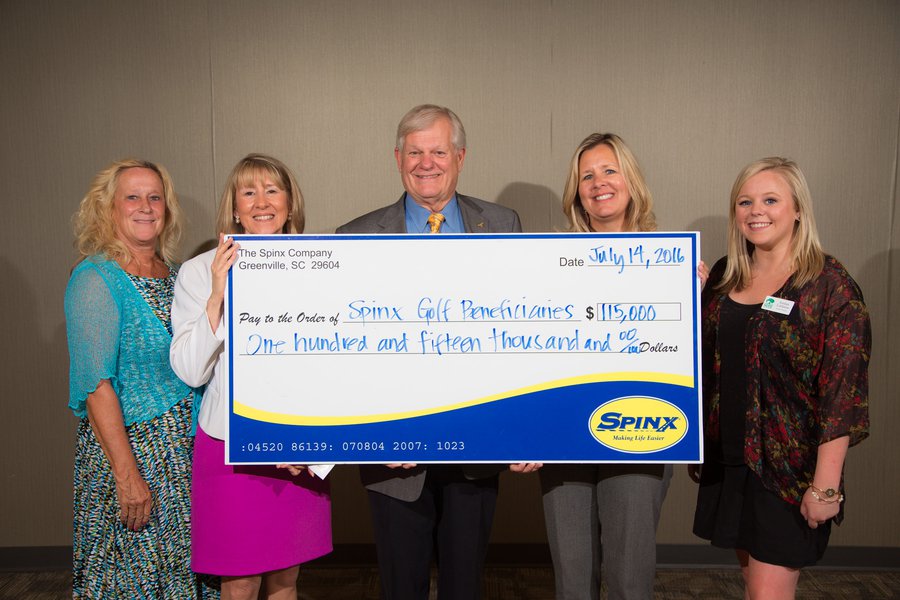 On Thursday, July 14th Spinx held their annual check presentation, were they donated the proceeds from the Annual Spinx Charity Golf Tournament to five SC charities. The ceremony was held at the Chamber of Commerce.

Representatives from all charities were present, except for American Red Cross of the Lowcountry, who will have a separate ceremony later this month. Each charity spoke briefly on how they plan to use the funds. Ronald McDonald House will use the funds to assist with the opening of a new house and Safe Harbor will be able to better assist children who have been exposed to domestic violence and will begin an education program to help students avoid becoming one of those statistics. Red Cross will use the money to train volunteers, and Harvest Food Bank will be able to expand their meal services to children during the summer months.

The checks were presented by Stewart Spinks, the company’s founder, along with members of the Spinx executive leadership team. “The Spinx Charity Classic plays an important role in our company’s charitable giving and this year’s proceeds exceeded what we have been able to give back to beneficiaries in years past,” Stewart Spinks said, “As always, we are very appreciative of our sponsors and vendor partners for helping us make a positive impact in the communities where we do business.”

Since its inception, proceeds from the Spinx Charity Classic have amassed nearly $1 million to local charities whose missions align with that of Spinx Corporate charitable mission, “Spinx & Kids! Mind, Body, Spirit. Growing healthy kids where we live, work and play!”